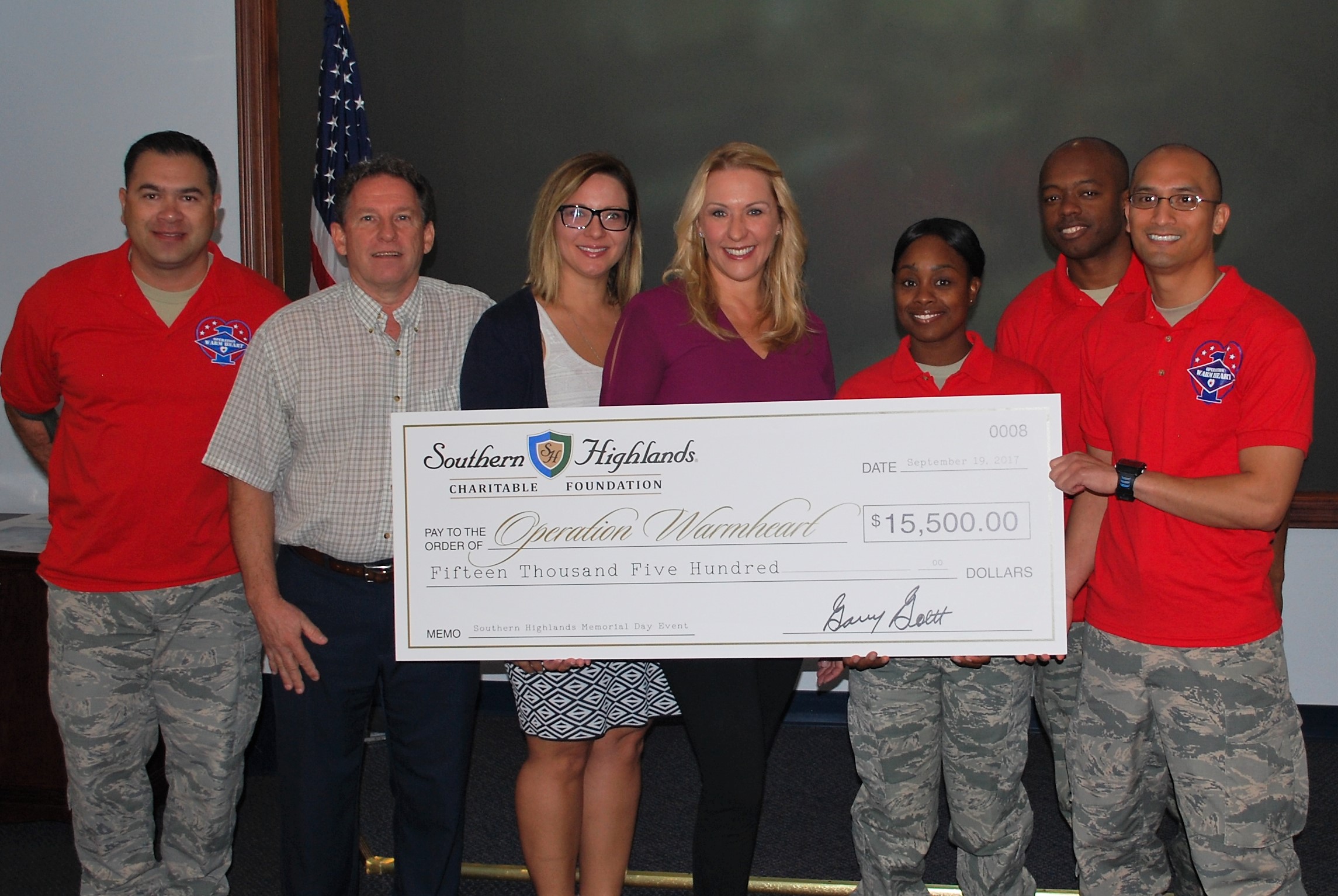 Since 2007, Foundation has raised more than $177K to help local airmen in need

LAS VEGAS, NV—Continuing its mission to aid families in need throughout the Las Vegas community, the Southern Highlands Charitable Foundation presented a check for $15,500 on Tuesday, September 19, 2017 to Nellis and Creech Air Force Base’s Operation Warm Heart, a private, non-profit organization that provides financial assistance to local airmen and their families.

The funds, raised at the master-planned community’s annual Memorial Day celebration, will go toward Operation Warm Heart initiatives that support the health, morale and welfare of the airmen of the Nellis and Creech military community, such as random acts of kindness and financial assistance for personal hardships and family emergencies not covered by other Air Force programs.

Hosted by the Southern Highlands Community Association, the Memorial Day celebration is free of charge to event attendees, with all funds collected through food and beverage sales going directly to support Operation Warm Heart.

This year marks the tenth consecutive year that the celebration has served as a fundraiser for Operation Warm Heart. According to Garry Goett, president/CEO of Olympia Companies and founder of the Southern Highlands Charitable Foundation, this relationship is a natural one.

“The foundation first initiated Southern Highlands’ annual Memorial Day celebration in 2004 as a remembrance of our fallen heroes in the Armed Forces,” says Goett. “Three years later, we recognized an opportunity for this event to not only honor the memory of those who have served our country but to also support the brave members of our community and their families who are currently serving in the military.”

Since then, the foundation’s partnership with Operation Warm Heart has expanded beyond Memorial Day to include an annual winter festival and holiday tree-lighting extravaganza, where community members are invited to make monetary donations or donate children’s toys. One hundred percent of proceeds from this event also go to support Nellis and Creech’s Operation Warm Heart.

In 2016, the Southern Highlands Charitable Foundation was nominated for the Armed Forces Spirit of Hope Award for its dedication to local men and women in the Armed Forces. Since 2007, the foundation has raised more than $177,000 to support Operation Warm Heart and assist local military members and their families. For more information, visit https://olympiacompanies.com/sh-charitable-foundation/.